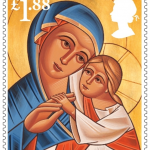 This Christmas stamp will adorn many letters from England this year; it has been designed by a Coptic artist from Egypt who lives in England.

Matthew 5, 9-11: “Blessed are the peacemakers, for they will be called children of God. Blessed are those who are persecuted for righteousness’ sake, for theirs is the kingdom of heaven. Blessed are you when people revile you and persecute you and utter all kinds of evil against you falsely on my account. Rejoice and be glad, for your reward is great in heaven”.

These are the Bible verses that resound within me when I think of what happened in Egypt after the ouster of Morsi, the democratically elected president. One year after he came into power, the people had enough of his promises, and they went again into the street. On June 30, 2013, 33 million Egyptians demonstrated against his rule. According to official figures, there are 10% Christians in Egypt, and they were among these 33 million protesters. But only the Christians were made responsible for these demonstrations. And then, when the two protester camps of the Muslim Brotherhood were cleared on August 14, there was a wave of attacks in Upper Egypt at the same time. Nowhere else so many churches, community centers, schools, parish development centers, Coptic shops and houses of Christians were plundered und set to fire, as in the Minia district! The plunderers, full of hate, did not even stop before attacking an orphanage! And so we read in the newspapers about a wave of attacks against Christians! Their daily life is made to a life in hell; one could see blank hatred in the faces of the plunderers and attackers.

And even after August 14, the wave of violence did not stop: even today Christians are killed by snipers in front of their churches.

But how did the Christians react?

There was no counter-violence, nobody preached hatred against all those who showed their hatred. With humility and patience, Christians bear their personal distress, and their common distress, as they have so many times, for so many years. The word of Jesus is deeply ingrained in them: “But I say to you that listen, love your enemies, do good to those who hate you”, so they cannot but love.

A Salafi in our village, Berba, wanted to frighten a mother who took her child to the parish kindergarten, where for more than 20 years, both Moslem and Christian children have been prepared for school. He told her: if your children go to the Christian development center, they are subjected to Christian teaching. But the mother did not give in; she just said, she would prefer her children to be subjected to Christian doctrine, rather than be trained by the Salafis to become terrorists.

I have been living for more than 20 years in Egypt, in El Berba village, among Christians and Muslims. Today, I am proud of all those who do not give in to browbeating. Of all the Christians in Egypt, who have lived and live following the words of Jesus. Of all the Muslims who live their faith and their conviction according to the words of the Quran and of Islamic writings (hadiths). In the Sahīh al-Bukhārī (writings based on Muhammad’s sayings) it says: “No one is a true believer if he does not wish for his brother what he wishes to have himself”.

All who take the sword will perish by the sword, according to the words of Jesus (Matthew 26, 52), so I wish everybody in Isaiah’s words (19, 25) “Blessed be Egypt my people, and Assyria the work of my hands, and Israel my heritage”.

Wishing you a blessed Advent 2013,