Warning: "continue" targeting switch is equivalent to "break". Did you mean to use "continue 2"? in /home/.sites/332/site2343028/web/nds-med/wp-content/plugins/widget-entries/iinclude_page.php on line 307 Keren Or – Notre Dame de Sion 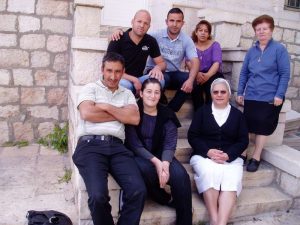 Palestinian Moslem and Christian in Bethany lessons of Hebrew were taught by Sr.Carmen

In September 1993 I retired from teaching English in an Israeli Municipal High School of some 1600 Moslem girls and some 95 teachers, majority Moslem and a very small percentage of the Christian teachers. After having taught there for 22 years, I thought I had lots of time to visit friends, visit Museums, read etc. This did not last long for immediately I embarked in doing secretarial work in the Patriarchate, first Sister of Sion ever to be employed there since the Patriarch Valerga who received Fr. Mary in the Holy Land said to him that he was welcome but not to expect from the Patriarch any kind of apostolate or financial assistance for the sisters.

Soon after that I was asked to teach English to the seminarians and Hebrew to the Staff in the Patriarchal Seminary of Beit Jala. This was followed by serving as secretary to the major seminary and secretary to the rector Mgr. Lahham.

Having completed my M.A. degree in Jewish History at the Hebrew University in January 1994, I embarked in serving the Union of Religious Superiors of the Holy Land both as delegate of the English speaking section until few years ago and fulfilled the task of General Secretary of the same USRTS to this day. Parallel to these activities, for 23 years, I worked at Notre Dame of Jerusalem Center in the service of the pilgrims in the religious and cultural services.

As seen in another abstract entitled: “Involved in efforts of Peace” I enjoyed very much working towards Peace, be it in the administration of the Ulpan run by the Hebrew University at Ecce Homo in the section of Israelis learning Arabic and later by the teaching of Biblical and Modern Hebrew in different Institutions.

Another project I am involved in is “Hand in Hand” where I am on its board for several years. This is the Center for Jewish Arab Education in Israel established in 1997 in order to develop a Jewish-Arab framework of co-existence in education, by means of developing bilingual and multicultural schools attended by both Arab and Jewish children. 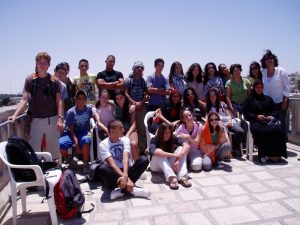 Youngs under the auspices of Neve Shalom guided by Sr.Carmen in Jerusalem

In recent years, quite often I am called upon to participate in panels for Israeli and Palestinian understanding as well as guiding Israelis and Palestinians to Christian Holy Places, an example of this is accompanying youth under the auspices of Neve Shalom.

During the last three and a half years, along with the joy of serving the Province, some of the above activities continued. Now after January 20th 2012, I hope to have more time to invest in deepening the Word of God in various ways as well as be involved locally and working towards peace.