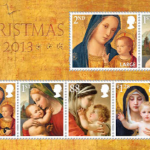 The Christmas stamps in GB this year carry the Madonna and Child imagery. The Royal Mail commissioned Robert Maude and Sarah Davies to design four of the stamps using art from previous centuries and a fifth stamp has been designed by the young British Coptic artist, Fadi Mikhail using the beautiful Neo-Coptic art of iconography. The Royal Mail has decided this year that one of the designs would be reflective of ethnic diversity in the UK.

Fadi Mikhail was born in 1984 and his own website, UK Coptic Icons, gives a short biography of the artist:

He is an Egyptian-English painter and a graduate from the world-renowned Slade School of Fine Art, University College London (UCL).

Even before focusing on iconography, his work has always been semi-abstract and figurative, with close links to both German expressionism and English romanticism. His paintings have been exhibited in such venues as The British Museum and Westminster Cathedral in London, but most find their way to private and domestic collections.

Further to his studies at The Slade, Fadi was apprenticed by the father of Neo-Coptic Iconography – the late Professor Isaac Fanous – in California USA. Professor Fanous was undoubtedly one of the most inspiring figures in Fadi’s development as a painter.