Since the revolution of January 25, 2011 (which led to the deposition of President Mubarak), safety is very fragile in Egypt, and the legal system has unsolvable problems. Crime rate has increased dramatically: indeed a bottomless pit! Where should people hide when they could be killed without any obvious reason? When kidnappings of well-off persons, especially of Christians, happen every day without ever being resolved? A year ago, a young man from a neighbouring village was kidnapped; he has not reappeared till this day. Why? Since ransom was not paid in time? No, it was because the family and neighbours, witnesses of the kidnapping, had gone to the police instead! And so the booty that did not bring any money has probably been disposed of somewhere in the desert.

Now, a man from our village, El Berba, has been kidnapped. He was on his way on his moped between the villages, when he was brutally dragged into a Toyota by a group of men. Osamer, the victim, is father of three children aged between 14 and 8 years. His father is a well-respected personality in the village and plays an important role in our Coptic-Catholic Parish.

Such an event is certainly upsetting! Only 24 hours have passed, and the family tries to pay ransom before it is too late!

This morning, September 18, 2013, I walked through the village with journalists Markus Bickel of the „Frankfurter Allgemeine Zeitung“, Dr. Martin Gehlen of “Tagesspiegel” and the photographer Catrin. At that time, I had not yet learned of yesterday’s kidnapping, and so I told them that our village is quite different. 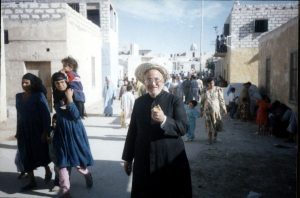 Abuna Isaak walks through the village

When we stood before the church, people told us why nobody has set fire to our church. And after an additional journalist’s question, the answer was: “Because Love resides among us!” This love has been implanted by Abuna Isaak, the longtime village pastor. His was a meritorious life: 50 years in El Berba! And he died on the day of the 50th anniversary of his priesthood, on June 6, 2000.

Unsuspecting of the kidnapping, we talked about which phrase Abuna Isaak had chosen for his jubilee. It was the words of ancient Simeon (Lk 2,29): “Now Lord, You are releasing Your bond-servant to depart in peace, according to Your word. For my eyes have seen Your salvation, which you have prepared in the presence of all peoples. A light of revelation to the gentiles, and the glory of your people Israel.” These words of enjoyment about many years of practiced Love and Dialogue have then become his testament.

For me, a sister of the congregation “Notre Dame de Sion” it is essential to know, as a matter of course, that “Dialogue” is the motto of our service to the village. Our logo says “Dialogue by development assistance”. This dialogue is most important for anything that develops within the village. In accompanying young people toward adulthood, in learning together, in exchanging ideas, and by developing various infrastructure projects in our village. Wherever we let Love dwell among us, we live what pastor Isaak has left to us.

That ransom was paid  48 hours later by the family and the young man went back to his family healthy.