Until now, a group of Muslim brothers from Berba is holding out in the demonstration at the Rabaa Al-Adawiya Mosque. And we hope that none of them will be killed. All those who had been on Tachir square came back the same evening. The village is divided into a smaller group of followers of Mursi and the rest, who demonstrates against the proponents of Mursi. Our house (of the Sisters NDS) is surrounded by Muslim Brothers, and so my nights are often without sleep, when I hear heated discussions under my window. Or when the loudspeakers of the mosque call for Jihad and for fighting all those who are not in favour of Mursi.

There have been continuous discussions in the media, in European politics and also in American politics concerning the question: has this been a military coup or hasn’t it? This led to another call for a demonstration that took place on Friday, Juli 26. There were many people on both sides. Judging from the pictures, there were many more people on Tahrir square (33 million in all of Egypt) than on Rabaa Al adawiya square (3 million in all of Egypt). Half of Egypt was in the streets, with wives and children. 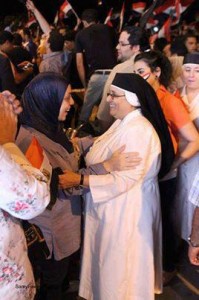 While on Tahrir square, there have been scenes of solidarity and friendship between Christians and Muslims, we see scenes on Rabaa Al adawiya square where Islam is defended as the only true religion. The call of the Tamarod Rebellion was not a call against the religion of Islam, but a political call against the president and against all those who have brought the country toward the brink of chaos. “We want to live” is the motto of the opposition against Mursi. “We have had enough of your shady attacks on the Christians and on the enlightened-liberal Islam that we live and want to live!”. In TV shows, one hears the question: “We would really like to know where you learn this hatred of persons of a different belief? Are we not Muslims, just as you are? Do we not all have the same Qur’an?

Eqypt is deeply divided! But not only Egypt, also Tunesia, Libya. And in Turkey, we hear the same call: “We want to live! Following our ideas, and not according to a religious belief that has been artificially superimposed upon us!”