Warning: "continue" targeting switch is equivalent to "break". Did you mean to use "continue 2"? in /home/.sites/332/site2343028/web/nds-med/wp-content/plugins/widget-entries/iinclude_page.php on line 307 Vigil of the Pentecost – Notre Dame de Sion

Introduction of the readings
Genesis 11:1-9 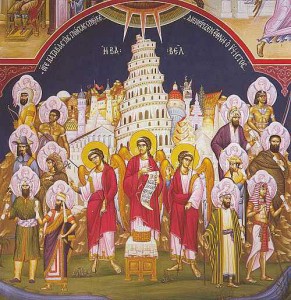 Listening  to the story of Babel we can ask a question: Why did God want to destroy the unity of the children of Noah? Why God is presented as the One who introduces disharmony in humanity that had one goal, destroying their engagement and dispersing in the world?

As a first answer we will ask another question, that will be a red thread (a link) between the three texts that we will read, starting with 3 themes that we will find in each one: unity, listening,  goal.

We will ask ourselves for each text the following  questions: “what kind of unity is it? From what kind of listening attitude? In what aim?

As a background for our listening of  the first text,  we have to remember  that a name in the Bible represents not only the person but it also reveals something profound about somebody, which is given by God and is received. (for example Adam and Eve,  Sarah and Abraham 12:22)

We can also remember the beginning of the story of Creation about the positive commandment that God gives to the humankind:  to be fruitful, to multiply and to fill the earth.

And how  the  refusal , the “non – listening” leads  to self – centred attitude in order “not to be dispersed”

Here, unity  which is something positive in itself, is turned the other way around, at  the service of  human ambition, in order to build  a  world without God, where only humans are exalted. We know where this can lead – it can lead to a dictatorship,  followed by suffering  and  horror.

In our story the unity of language at the service of human ambition leads to a confusion , which  is  the  contrary of what happened in Acts 2, where the unique word is understood by each one in its own tongue. It is  the Spirit that builds unity, it is a gift of God, it is not unity which centers on oneself but which disperses in order to bring the Good News from Jerusalem to the end of the earth. 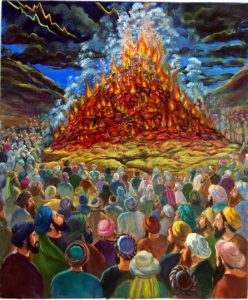 The text of Exodus that we will hear talks about the Gift of the Covenant between God and the People on t mount Sinai after the exodus from Egypt. It is in waiting for this gift that the people becomes one “And Israel camped there “ the word camped is in singular. There is a call and an answer for a mission.

We can listen to this text with this question: “What kind of unity is it? From what kind of listening attitude? In what aim?

We find here again the na-ase of the Babel story but in another direction:

“ We will do and we will hear” Here there is no more  exaltation of the collective “I” but  an answer, preceded by a  listening,  to a choice, and  to a mission given by God, mission to be the one that takes  the Torah upon oneself and witnesses  God’s  Revelation  contained in it.

We can listen to this text with the background of the text of the Act 2  , the  Pentecost: what is happening on the mount  Sion, echoes  what  happened on Sinai. It is the renewal of the Covenant transfigured   by  Christ’s  Resurrection.

The text of Joel that we will hear is situated on the second part where God comforts His people announcing the salvation in an eschatological vision of the Day of the Lord.

If we ask ourselves for the last time the same questions : What kind of unity is it? From  what kind of listening attitude? In  what aim? We will notice a shift.

The action of the Spirit in the Last Days is stronger and stronger. In a certain way the Spirit is doing everything. The knowledge of God is interior (vision prophecies) it is universal, it reaches “all flesh “ It is like what Isaiah says in the vision of the wolf and the  lamb : “the land will filled with the knowledge of the Lord like the waters fill the sea” Is 12:9

I would like to end with this commentary of Rabbi Haim the Wołożyn talking about the messianic gift of beautiful eyes, referring himself to the beautiful eyes of David in the book of Samuel. Rabbi Haim affirms that in the time of Messiah the children of Israel will find again the clear vision that they had at Mount Sinai. No distraction will never more deform their vision because they will see with their ears. Guided  only by the Word of God. All the creatures will share the messianic gift of the beautiful eyes and they will witness  it together. As says the prophet Isaiah 40:5 “ the glory of the Lord  will be revealed and all Creature together will witness it. The Oracle of the Lord has spoken”. In  harmony without discord, in brotherhood without jealousy, without pride. Each creature will know the straight way  which is his own and will not interfere into the others’ .

Photos from our celebration: