Warning: "continue" targeting switch is equivalent to "break". Did you mean to use "continue 2"? in /home/.sites/332/site2343028/web/nds-med/wp-content/plugins/widget-entries/iinclude_page.php on line 307 Activities in Berba – Notre Dame de Sion 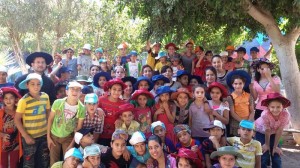 On June 30, Wafaa, Gosia (a Polish volunteer) and I went to Berba for 6 weeks of apostolic activities in the village. Gosia’s presence was a real gift for us and for the village. Each of us had our particular focus: Gosia did art projects with the children in the Children’s Summer Club in the garden and for the catechetical sessions; Wafaa used some of the sewing skills she has learned in her work of the last 2 years in Alexandria and Cairo and also took part in the catechetical sessions; part of my role was to organize Gosia’s activities (materials needed, schedules, groups, helpers, etc.). Usually the 3 of us were present during the activities helping the catechists and children where needed. It was a great opportunity for me to get to know a new generation of children and to work with catechists who were children when I left Berba in 2004! Another activity that Gosia did was teaching some circle dances to a group of girls, high school age and up. We decided with the girls to call this “Music with movement” to avoid the negative connotations of the word “dance” in Arabic! The girls loved it! My main focus was visiting families, which we did sometimes the three of us together or often Gosia and

I. Of course many people asked about Juliana and when she would be coming back! Another common question was whether Gosia was a sister, or was she going to be a sister? Was she my niece? Gosia got used to these questions and our teasing her about them and was able to take it all in stride with humor. During our time in Berba, we shared the shock and grief of the neighboring village parish of Foga-i which lost 11 young people in a drowning accident during an outing at the Red Sea. One of the girls who died had relatives in Berba which brought the tragedy even closer. It was an unusually hot summer, with frequent electricity, water and internet cuts but in spite of all these challenges our time was truly blessed, fruitful and full of joy. El hamdu lilah!