The last 4 months of life in Berba have been different as Sr. Jackie, a sister from Canada, lived in our midst. She was here as part of a discernment process of looking at the possibility of living and working with the marginalized here or in Canada. She was living with me in our community house and spent some time getting to know some of the villagers. She learned some Arabic as it is essential in order to truly enter into life in Upper Egypt. One young woman from the village gave her almost daily help with the language and when she could no longer continue due to her exams, another one stepped in. Speaking to Paskalina, my cat, was also a way for to practice words such as ‘forbidden, useless, repent of your evil ways’ that she could not use on people.
Life in the village requires many adjustments and adaptations. Part of this adjustment time is physical so time was spent the first while going to various clinics and doctors for matters such as bladder infections, parasites, wart removal….We joked at how she would soon know every doctor, clinic, and hospital in the area. At one point, the doctor said to drink only boiled water and as the heat increased so did the work needed to keep up with the demand for cold water day and night. As she could only eat cooked or peeled food, she began to look on the internet for recipes for cooked lettuce but never got around to trying any of them.
Another huge adjustment was to the various sounds of the village such as the donkeys, goats, cows, water buffaloes, talking on the street, the call to prayer and the various announcements coming through the mosque loud speakers. The noisy nights and quiet mornings taught her something about lifestyle here in the village: go to bed with the chickens and get up with the roosters who were always available to remind her of the coming of daybreak. The first call to prayer made sure she knew it was morning. To her amazement, she began to sleep through some of this or if she woke up actually went back to sleep.
Of course, a huge reality that was a challenge for her was the heat that began before she left. While 40 below in Canada is part of her reality, 40 above is not. She learned how as the weather gets hotter, everything is done at a slower pace and energy is conserved in order to survive. Afternoon naps are part of this conservation. Adding to the difficulty is the fact that the new government is shutting off the electricity for parts of some days. During a number of days of high temperatures, the power was shut off up to 3 times a day adding up to over 6 hours of no electricity during which time the fans cannot be used. This will continue to make life more difficult for the villagers throughout the worst heat of the summer. 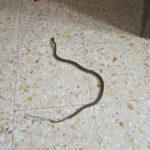 To make sure she would not forget her life with us, shortly before she left Berba she was provided with an experience that could have made her leave then and there. Upon returning from mass, she went to her room to change her clothes. While opening her closet door, she happened to look down and saw something strange. To her horror, it started to slither and she realized it was a snake. She ran downstairs calling me and to my disbelief I could hear her yelling that there was a snake in her room. I called our friend Wilson and he came over and killed it. As there have not been any previous encounters with snakes in the new house, I think its presence was due to the fact that we have been cleaning out a storage room on the first floor. Perhaps it had been disturbed and found safety in Jackie’s room where the cat is forbidden to enter. Jackie is considering changing this policy on her return. This was also a lesson for us to pay close attention to the cat when she is acting in a very strange way over a number of days.

Along with these adjustments, she had had enjoyable times getting to know the immediate neighbours, the handicapped children and their teachers in the program on our 4th floor, and visiting the children in the garden on Friday afternoons. Regularly going down to our door and sitting on a bench (maztabah) allowed her to observe day to day life and to interact with the people especially the women, young and old, and their children. She also went with me to visit some of the people in their homes. Being a primary school teacher with a great love of children, she paid special attention to them and learned many of their names. Of course, they were happy to show off the little English that they know. When our neighbour’s boy was sick, she went to see how he was after a few days of not seeing him. She has learned that in the village this is wajib (proper). After my return home after driving her to Cairo to catch her plane, little 3 year old Marina cried and cried asking for Jackie. Personal connections were made. She appreciated the hospitality, kindness, and generosity of the villagers.
Before leaving Berba to go to the Bat Kol program, the decision was made that Jackie would return for a year to continue the discernment regarding the possibility of coming here to live for a longer time.
I thank Jackie for the months of fun and laughter, as well as entries in Sunday and daily prayer where we shared life, feelings, fears, and the faith life of one another. Like Marina and Paskalina (who sits looking at her door waiting to be played with), I miss her already. I continue to pray for her as the discernment continues that the Lord will lead her in the call to respond to the needs of the Congregation.

Thank you Jacky for this time together and “So God will” see you soon in Berba. Juliana