Warning: "continue" targeting switch is equivalent to "break". Did you mean to use "continue 2"? in /home/.sites/332/site2343028/web/nds-med/wp-content/plugins/widget-entries/iinclude_page.php on line 307 NDS in Berba – Notre Dame de Sion 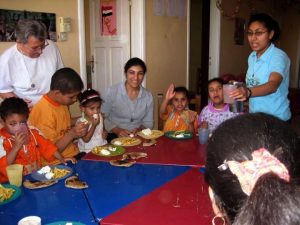 Here, one or two or three sisters live and share life with the rural people of Egypt.
We, the Congregation of the Sisters of Sion came to El Berba in 1994. We began living in a big old farmhouse with the first floor being our apartment. It had all the comforts such as tile floors, shower with hot and cold water, and the best thing in the house was a fully automatic washing machine. A computer that allowed us to enter into contact with the outside world was one of our first achievements after we were able to install the telephone line!
Today we live in a new house that was built for the sisters, where many of the activities of the sisters take place. At the moment we have the centre for the mentally challenged children with its education program and workshops. We have a candle workshop and also our jam production area. We sell both of these two products to the local community in Berba.
There is a piece of land with many fruit trees which is close to our house that was given to us by the Coptic-Catholic parish. Over the years, we have developed it to provide a play area for the children. It provides a good space for the children to run and play. It is complete with various exercise equipment and a soccer field. It is beautifully arranged with many more fruit trees, with vegetables and flowers. It is really a ‘little oasis’ for the children.

Sr. Juliana and the children on a carousel

I, Sister Juliana from Austria, have lived here in Berba since 1992. Since that time, many small steps have been taken which bring hope and life in abundance. Sr. Darlene was called to Rome during the period of 2004-2010, so that I had to live part of that period alone.

During that time the Berba house began to develop into a formation house, as young girls from the village began to look at us also with the idea of becoming part of the congregation, a congregation which gives witness to religious life and to the faithful love of God. They began to be attracted by the simplicity of our life and to see it as a call of God in their life. Now one of these young women made her first vows, another one is a novice and another one is discerning her call to religious life in Sion.