Warning: "continue" targeting switch is equivalent to "break". Did you mean to use "continue 2"? in /home/.sites/332/site2343028/web/nds-med/wp-content/plugins/widget-entries/iinclude_page.php on line 307 Istanbul – Notre Dame de Sion

The two Ratisbonne brothers each discovered Christianity by different paths, and one sixteen years after the other. In 1850, they joined up to work together. An ancestral experience had taught them the ravages that can be caused by prejudice, a prioris, ideas passed on… Thus they began an educational house for girls in Paris where the girls learned to live together with their different nationalities, religions, social milieus. 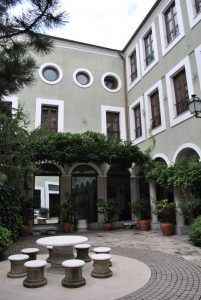 Soon they had an opportunity to replace the Sisters of Charity in a boarding school in… “Constantinople”. Two considerations propelled them to accept the offer (1856):

Since 1996, the school also welcomes boys. Today, with 620 students, the Notre Dame de Sion High School dynamically continues its mission based on principles of quality and excellence. The Notre Dame de Sion High School has always worked to form young people capable of a role in the life of their country over and beyond their own family.
The school aims at forming young people with character, with an enlightened conscience, open to the world. 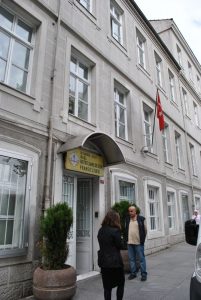 They attempt this through simple and trusting relations between the students and teachers on the one hand, and on the other hand by means of the mixture  of children from different milieus, cultures and religions, which was dear to Father Theodore Ratisbonne. By becoming used to living in an egalitarian atmosphere, the young people learn to know the other, to respect and love the other for what he and she are. Thanks to this clear-sighted and tolerant way of thinking, the school desires to inculcate in the young people love and respect without fanaticism or exclusiveness, in a constant search for what unites rather than divides.
You can discover the high school’s history, development and present-day life on its website

In 2001, we opened a Turkish primary school, Neslin Degisen Sesi, which means “Voice of the Rising Generation”. In this name, you can find the high school’s initials. At present, the primary school has 325 pupils, and there are 91 children in the nursery school, which was opened in 2009. We wish them that they might develop well.
This is the primary school’s website.