The Inter-religious Coordinating Council of Israel (ICCI) is launching several new programs for this year, under the title of “An Other Look.” These programs include

Bernadette, Maureen and I went to the first session titled “Understanding Each Other—Palestinian and Jewish Perspective.” We had a very stimulating and informative discussion after each film clip. The different aspects that were highlighted were: 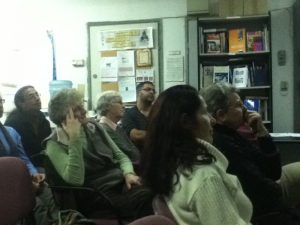 Those present were, Israelis, Palestinians and expatriates, and it was great to hear the honesty expressed and the acknowledgement of  the injustices that are so obvious and that those of us present deeply regret. It is a tremendous initiative to gather peoples of other faith to share some of the concerns that are blocks to peace.

We as a community are members of a Jewish Christian Dialogue Group called “Rainbow. For this year the theme we have chosen is a monthly presentation on a psalm used in both Jewish and Christian liturgies. We alternate each month-when there is a Christian presenter there is a response from a Jew and vice versa. We can always be assured that it is a provoking and stimulating discussion.  We are grateful for the ease and honesty with which we can meet and discuss many issues