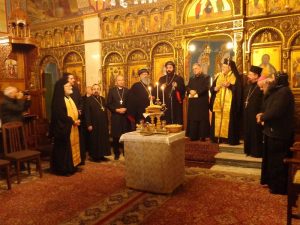 In the Greek Catholic Patriarchate in Jerusalem

As every year, we were invited to pray in a different church each day. We took part in the prayer of the Anglicans, the Lutherans, the Greek, Coptic, Ethiopian, and Syrian Orthodox, the Melkites, and the Latin Catholics. On Thursday, the prayer is always at the Cenacle with a mixture of all the rites and languages.

Many people took part, especially foreigners living in Israel, but also people from the local Arab communities and a few representatives of the Hebrew-speaking communities.
After the prayer, each community invited us to share bread and wine or one of their traditional dishes. With the Franciscans, it was even a real meal! 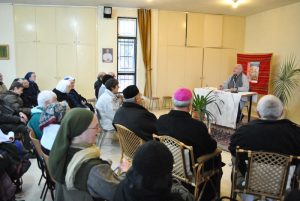 As usual, the week was preceded by a conference given by Father Frans Bouwen, Missionary of Africa (White Father) and a world expert on ecumenism. He shared with us the present reality of ecumenism in the world and in our region of the Middle East.

Once again, we got a taste of the richness of the various liturgical and cultural expressions that the same faith finds, and of the privilege of living in this land, where we can read the history of the Church by means of the traditions of the various Churches of Christ.

It is probably no coincidence that January 20 is at the beginning of this week. Is not the unity of Christians brought about on the basis of our common roots and our faith in Jesus Christ?