Sister Juliana Baldinger of the Sisters of Sion, novice mistress of the new novitiate, sent this report on the beginning of the canonical year for the six novices to the Community of the Hebrew speaking Catholics. 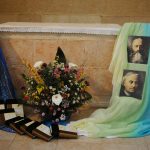 March 25, 2014, the Feast of the Annunciation, was a very special day for the Sisters of Sion. At Notre Dame de Sion in Ein Karem, six women, from Guatamala, the Philippines, Brazil, and Egypt, began their “Canonical Year” in the newly established Congregational Novitiate there. In this village, some 2000 years ago, Mary the Mother of Jesus confirmed her “Yes” to the unknown, to the seemingly impossible, her humble, “Yes, let it be done to me as you have said.”

Two names, Mary and Miryam echo through the millennia, in the Jewish and Christian communities. Countless girls, and even boys, have been given this name because of the promise it holds. Alphonse Ratisbonne, the brother of Theodore Ratisbonne who founded the Congregation, chose to be known as Marie-Alphonse, after the “Event of 20 January 1842, as a way of expressing what had occurred in his encounter with Mary that day.

In a much earlier time, on the shore of the Sea of Reeds, Miryam, the Sister of Moses, danced and sang God’s gift of freedom to her people. Father David Neuhaus, our celebrant at the Eucharist, reminded us that only people who know their freedom also know how to dance, and he invited us to remember the lovely liturgical dance of the novices at the opening of the liturgy.

All of us who had gathered to celebrate this moment had come because of our own call and commitment to follow Jesus. We want to do it well, to be witnesses, in the Church and world today, of God’s faithful love for the Jewish people, and of God’s promises to them for all humanity.

As a novice, or a sister, or a brother of Sion, the crucial question is not how much education I have, or how good I might be in ministry, but rather, in the light of the teaching and example of Jesus, how much love do I want to give? How deep is my commitment to give myself to God, in following Jesus so that, like John the Baptist I can say, “Jesus must become greater, while I must become less” (John 3:30). It is about allowing love to grow in my life, the love I know in Jesus. 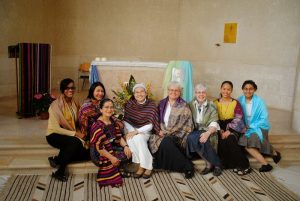 The six novices are beginning their “Canonical Year,” or as the Sisters of Sion call it, the “Sinai Year,” recalling that mountain of God, that was a place of powerful revelation and incredible intimacy, in a divine-human encounter. The question of the Canonical Year that one ponders over and over again is a gentle invitation and a great challenge: Is God enough for me? The year is a process of deepening my commitment to religious life, and letting go of myself, in order to follow Jesus. How can I respond to this call to love, as Jesus did?