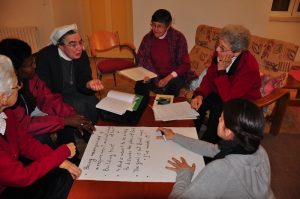 For one week, Ein Karem had the joy of welcoming the Congregation’s sisters working in formation, together with Oonah, Marge and Ivete.
They were 12 in number, coming from Australia, the Philippines, Poland, Egypt, Canada, Brazil, Costa Rica and Israel. The translators were Marta, Laure (a young French woman who lives in Israel), Alicia (a Spanish Comboni Sister who also lives in Israel).

We shared times of prayer and meals with them as well as the celebration of January 20, both the vigil and the feast. 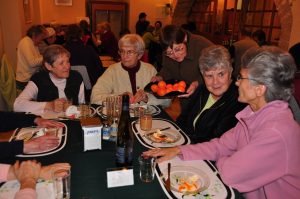 The sisters worked intensely and re-wrote the booklet on formation, and they shared a lot with one another. We certainly sensed how tired they were, but they were also happy and relaxed.
They had the opportunity to go on an excursion to the recently renewed place on the shore of the Jordan where Jesus is presumed to have been baptized.
For us in Ein Karem, all this was a foretaste of the future international novitiate.

“Without Jerusalem, Sion would have no raison d’être.

For what does Sion mean other than Jerusalem!”