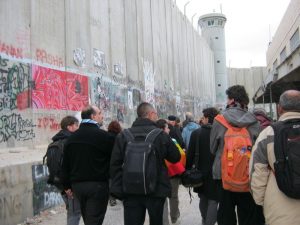 In an idyllic setting in an olive grove, the Christian community’s peace walk began in brilliant sunshine and with the chatter and delight of the young Italian peace-makers and the local Palestinian community, we said ‘yes’ to walking for justice and ‘no’ to more construction of the ten year old Wall of Separation.

We prayed with the words of Amos and Jeremiah, texts written in this land from times long past – but oh so relevant today. We prayed for the Christian and Muslim community, prisoners behind the wall. We prayed for the Israeli soldiers, boys and girls with guns at the checkpoint. 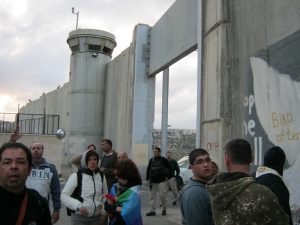 We walked the hills of Beit Jala and on into Bethlehem to pray at the infamous checkpoint where the Walls of Separation are covered with graffiti, horrible and ugly!  Comical and exciting; displaying messages of fear and freedom. Yes, our bodies were tired when we finally reached the door of Ecce Homo, but after a sleep we would be well. However, we knew that the hearts, minds and wills of the people of Bethlehem and Beit Jala were still with their pain and suffering because they know that more of their land, their olive groves and freedom to move is being stolen because of the Separation Wall. A wall that was not only planned but is continually under  construction. And we know that no Friday afternoon walk by ‘wee’ Christians is  going to change their situation.  Oh Lord, how long?