On Sunday, April 14, a huge crowd came to the cathedral from every corner of Tunisia to welcome the new Archbishop of Tunisia, Msgr. Ilario Antoniazzi, who succeeds Msgr. Maroun Lahham. He was consecrated on March 16 in 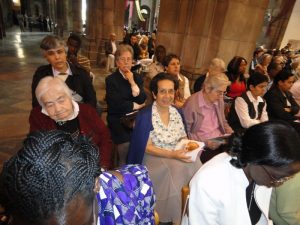 Nazareth. The Mass was very festive with many people: the old Christians of Tunisia and the very numerous African students from many French-speaking countries, many priests, and among others, nine priests and lay people who had come from the Holy Land, twelve bishops from Libya, Morocco, Algeria, Sicily and of course Msgr. Maroun Lahham, who came to install his successor before returning to Jordan.An African choir animated the celebration. The Gospel was sung marvelously well in Arabic. At the Offertory, the Africans wearing their traditional robes for great feasts arrived dancing and carrying the offerings. Many songs of joy followed by applause, blends of Tunisian, Palestinian, and African “youyous” burst forth at the end of the ceremony. 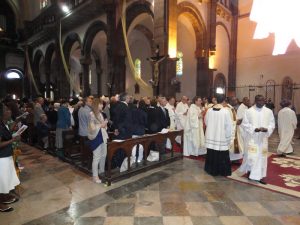 Then a small reception united the whole community again in the cathedral’s courtyard before everyone dispersed.