In response to the invitation by the interfaith and non-believing group, Msgr. Teissier, Archbishop emeritus of Algiers, came to spend the day of February 21 in Aubagne.
He arrived at 10 a.m. and was welcomed by an already numerous group in the library of the Observance chapel.
Introductions, talk about this and that, an interesting talk on the Jewish presence in Algeria (since the beginnings).
This was to replace the first encounter that was to have been held at the synagogue, but which had to be canceled.

Since more and more people arrived, we had to go down to the chapel, where in no time the heating was put on, the microphone installed… 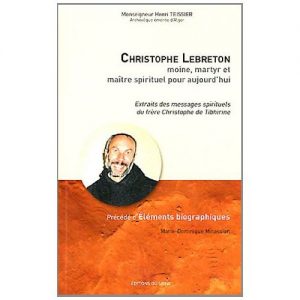 Thus Msgr. Teissier presented his books before a large audience. These books were:

At 2:30 p.m., we met again at the mosque for a discussion on “Living together”.
Msgr. Teissier gave three extraordinarily moving testimonies by Muslims who had attended Fr. Pierre Lafitte’s funeral; this latter had run a library in Algiers for medical students.

These texts are an eloquent proof that “living together” is not the fruit of an intellectual search, but exists where Faith in God is translated very naturally into attention to the other, into serving the other…
The students who had to do with Fr. Lafitte had definitely felt this.

The day was brought to closure between 6 and 8 p.m. in the community center “le Pin Vert”, which is run by our Muslim friend Kaddur.

We were surprised by the presence of a large number of Moroccans, Algerians, Tunisians, who took an active part in the sharing on “how to live one’s faith where one is, how to live its roots”. Several became enthusiastically involved in our projects.
Among these projects is that of having Msgr. Teissier return to us next November!
And of course the evening ended with a simple and friendly buffet supper.
We remain very grateful to Msgr. Teissier, who gave us generously of his time, his experience, and I would even say his friendship.