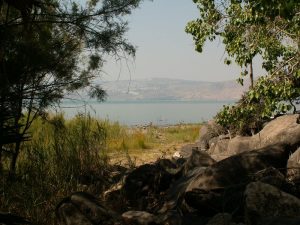 On Sunday March 4, Maureen and Trudy accompanied Bernadette and the 31 participants of the English speaking Biblical program to Galilee.

Leaving Jerusalem in heavy rain we were delighted to see the sun once we reached the Jordan Valley and this glorious weather continued for the whole week.  Unfortunately on our first night at Ron Beach in Tiberius, one of the participants, Fr. Mario, received news of the death of his sister. Due to a combination of effort, kindness and cooperation from our guide and a friend who was a travel agent, Mario was in a taxi on his way to Jerusalem with a new ticket in his pocket in less than an hour after receiving the news and with the help of Ecce Homo was on a flight early the next morning.

Our first time guide Ghada Boulos from Nazareth, was greatly appreciated by all.  As always on the Sabbatical program, Fr. Walter Vogels accompanied us and offered us “a way to pray with the Scriptures”, as well as presiding in daily Eucharist.  His excellent input and pastoral attentiveness to all is, and has been, a treasure when on pilgrimage in Galilee.