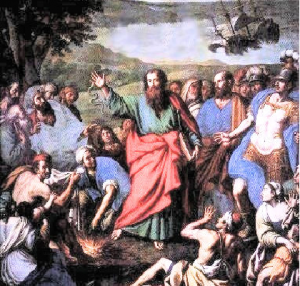 …He ordered those who could swim to throw themselves overboard…and so it was that all escaped to land. After we had escaped, we then learned that the island was called Malta.  (Acts 27:43-28:1)

Paul had gathered a bundle of sticks and put them on the fire, when a viper came out because of the heat and fastened on his hand… (Acts 28:3-6)

February 10th is a very important and special feast, very close to the heart of every Maltese citizen, whether in Malta or in the Diaspora.  We commemorate the very beginnings of our Christian Faith when St. Paul was shipwrecked on the little Island of Malta.

The Maltese community in the Holy Land takes this opportunity to get together to celebrate and encourage each other in whatever our ministry is outside our homeland.  This year we chose to celebrate at Ein Kerem, where the Brothers and Sisters of Sion made it a real feast by their warm welcome on their beautiful premises.

Three Maltese priests celebrated the Eucharist in our chapel and as usual we were honoured by the presence of His Excellency the Ambassador of Malta, Dr. Abraham Borg, and the Consul in Ramallah, Alan John Bugeja. Fr. Joe Calleja, OFM who is studying at the Flagellation, was our main celebrant and his inspiring homily was heart-warming.  Our ancestors were the Phoenicians, who originally came from the northern coast of Palestine, and therefore St. Paul found a familiar culture and language to communicate with the people of the island who spoke Aramaic/Hebrew (not Greek or Latin).  This enabled Paul to evangelise the people in three months!

“We shall have to run on some island” (Acts 27:26).  This expression “shall have to…”. is quoted in the Gospels and the Scriptures only when it expresses God’s plan; for example, “The Son of Man has to go up to Jerusalem…” Therefore it was in God’s plan that Paul should land in Malta.  This makes the Maltese people consider ourselves as “people of the Scriptures”, who carry the responsibility of spreading the Good News, like the first Christian community in the Holy Land.

Our Eucharist was followed by an aperitif and a delicious lunch in the dining room and a big cake to close our Celebration.