Warning: "continue" targeting switch is equivalent to "break". Did you mean to use "continue 2"? in /home/.sites/332/site2343028/web/nds-med/wp-content/plugins/widget-entries/iinclude_page.php on line 307 About Sukkot – Notre Dame de Sion 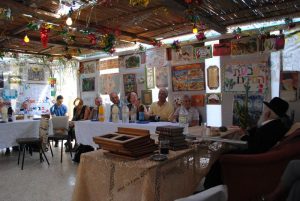 The root of the word « sukkot » expresses the idea of covering, sheltering, temporary. The most important in this construction is then the roof made of branches. A sukka is a booth or a hut. It was used to shelter the flocks (Gn 33,17), or to protect from the heat during the gathering of the crops in the fields ( Is 1,8) or from the burning sun (Jonah 4,5).

Probably the name of the feast came from its agricultural background, the feast of ingathering (hag ha-asif) when the farmers had to protect themselves in the fields at the end of the summer, when the sun is still burning. Later on it was linked to the Exodus from Egypt, as we can read in Lev 23, 42-43: You shall live in booths for seven days. All citizens in Israel shall live in booths so that your generations may know that I made the people of Israel live in booths when I brought them out of the Land of Egypt.

How did the writers of the Bible arrive to this association since obviously in the desert they lived in tents and not in booths.

The Jewish Oral tradition makes the link in commenting Ex 13,20 : They set out from Sukkot and camped at Etham, on the edge of the wilderness. In Gn 33, 17, it is said that Jacob built booths (sukkot) to shelter his flocks, and it is why he named the place Sukkot. The Jewish commentary of Ex 13,20 is not satisfied with this explanation and sees in this name Sukkot and according to what follows in the text (Ex 13,21-22), an allusion to the cloud which accompanied the children of Israel during their wanderings in the desert. Rabbi Aqiba said : « Sukkot is not the name of a place but (an allusion) to the clouds of glory » .And this is not enough, the commentary goes much further : the sukka does not remind one only of the past but foresees the end of time when the Lord will provide an eternal shelter not only for Israel but for all peoples. It is what is said in Isaiah 4,5- 6 : Then the Lord will create over the whole Mount Zion and over all its places of assembly a cloud by day; smoke and the shining of a flaming fire by night. Indeed over all glory there will be a canopy (huppa) and a boot (sukka) to serve as a shade from the heat and a refuge and a shelter from the storm and the rain.

The sukka, temporary dwelling, fragile and humble, makes of Sukkot, the last of the three pilgrimage festivals, the one which reminds the most, the temporary of our human life, journeying toward our final dwelling which is the One who is seated on the throne and (who) will spread over them his sukka1; the sun will not strike them nor the scorching heat. (Rev 7, 16). 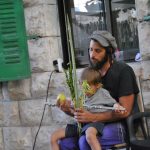 This week I read two commentaries concerning Sukkot. The first one invites us to remember all those who, often because of wars, are forced to live permanently in temporary shelters. The other urges us to taste and appreciate at least during one week in the year, to live in a narrow, rather empty, small but precious booth away from the consuming society which accumulates goods. The reading of Qohelet during this feast is meant to inspire such a reflection.

1 The greek word skene means at the same time a tent, a tabernacle, a booth. We are invited here to choose booth (sukka) because of the reference to the sun which will not strike…which reminds Is 4,5-6